The Use of the Knife 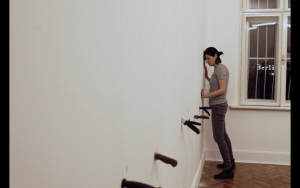 This performance by Sanja Latinović faces the silent materiality of the wall, as a provocation to act, and it activates seven props, knives of different origin and usage, in a process during which she articulates the forces of energetic discharges and charges in a form of several successive performative acts. She does not address that particular wall as a neutral background for the presentation of an artwork, as the modernist paradigm of the exhibitionary white cube would standardly prescribe, but as a challenge to do something with it, treating it in its very materiality. The acts she performs are not representational, they do not express some personal view of that wall, as a material structure, or a symbol, nor do they call for some imaginative suplementing of the sight of it. They violently effect the wall, cutting through its surface and deranging its visual homogenity, in order to bring it into an eroticised field of manipulation with objects which acquire a status of fetishes. In the first segment of the work, the artist perforates the wall by energetic moves which activate her whole body, concentrating the whole power of her physical act into the prick point. She stabs knives into the wall, in a linear order, in a specific, ergonomically shaped rhythm, and in an antropolometrically defined spatial scheme. Then she leaves them solidly plunged into the surface, in a manner that preserves the material trace of the act by which they got into there, and, in the same time, it forms a site specific installation, which will be activated in the next phase of the perfomrance in a very corporeal sense. In that phase the knieves change their character. From being just tools for the perfomance, they turn into fetish objects infused with her libidinal streams in a ritual mnner.

A knife stabbed into the wall becomes a falus, which gets involved into a specific personal ritual of the artist, performed in front o the audience. The ceremonial character of that performative act is evident in its form, and the manner in which it is carried out,and  not in reference to some other concrete rituals, which have historical role and social significance. That form manifests itself through antropologically set cathegories of ‘kenosis’ and ‘plerosis’, which name and denote processes of complete self-emptying of the self of the artist as na active subject, in the first step, and her repletion with energy from an outer source. In that second step she appropriates the falus and freely manipulates it, for her own pleasure. In that sense, the falus has no power over her, but is reduced to means of extracting maximum enjoyment. It is important to mention that these fetish objects, the knives, that acquire the fetish character, are turned towards the artist by they handles only, all the time, and, in difference to the tradition of performance in which the inclusion of knives or some other tools for stabbing and cutting stresses the vulnerability of the body of the artist, brought into a danger zone, here she has sovereign rule over the situation and the objecrs, safely manipulating them. Her body is not shown as penetrable and liable to be carved, but the’body’ of the wall. In  this pefromance there is no intention of self-mutiliation, and the stress is not on the coefficient of pain to be potentially induced by the use of sharp objects, but on the enjoyment acquired by their manipulation, which takes place in two ways. The sharp edge of the blade penetrates the wall, while the handle induces personal erotic enjoyment. That use of a knife is totally contrary to the dramaturgic sequences David Mamet has developed in the book “Three Uses of the Knife”, in which he has demonstrated his theatrical view on dramaturgy, under the strong influence of patriarchal culture. Namely, in support of his theses, he quoted an early blues and country music author, Huddie Ledbetter, i.e. his lyrics: “you take a knife, you use it to cut the bread, so you’ll have strength to work; you use it to shave, so you’ll look nice for your lover; on discovering her with another, you use it to cut out her lying heart”, and he did it in order to demonstrate the dialectical nature of the dramaturgical procedure, through three successive uses of knife as a prop. In this performance, the use of knife evades that type of normativization and subsuming under the logic of the dramaturgical narative, as Memet suggests, and it does so the same way as the genre of performance art constantly takes a distance from theatrical thinking.

(text by Stevan Vuković on a performance by Sanja Latinović)