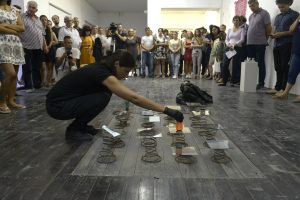 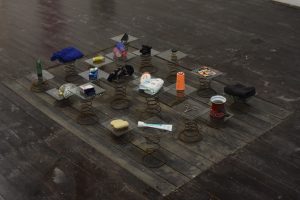 PERFORMANCE GLOVES happened at the end of Artist in Residency program in Jalovik. While the other artists and curators in residency were busy with their own working materials, Sanja Latinovic used space, testimonials about the village and participants as her working material. She even toyed with herself, testing her own ability to put herself in the shoes of somebody else, becoming a phan-tom thief from the Jalovik village. During ten days she was planning and conducting actions by stealing possessions of the participants. She created an atmosphere of suspicion among people, all the while living in a bubble of uncertainty and nervous euphoria by taking risks and not getting caught. Again, as always in her art practice, Latinovic tried to shake out some answers to difficult questions like: What is the level of trust amongst people? Is there a sense of justification for the situations in which we found ourselves? Is it easier just to blame somebody else, or to find and catch the true malfeasant?

Video work is a simple act of washing hands by which Latinovic evokes a famous statement of Pontius Pilate.